In a system under a set of conditions, number of phases (P) exist can be related to the number of components (C) and degrees of freedom (F) by Gibbs phase rule.

Degrees of freedom refers to the number of independent variables (e.g.: pressure, temperature) that can be varied individually to effect changes in a system.

Important information, useful in materials development and selection, obtainable from a phase diagram:

Where all three curves, solid, liquid and gas, meet, there is a unique combination of temperature and pressure where all three phases are in equilibrium together. This point is called a triple point. 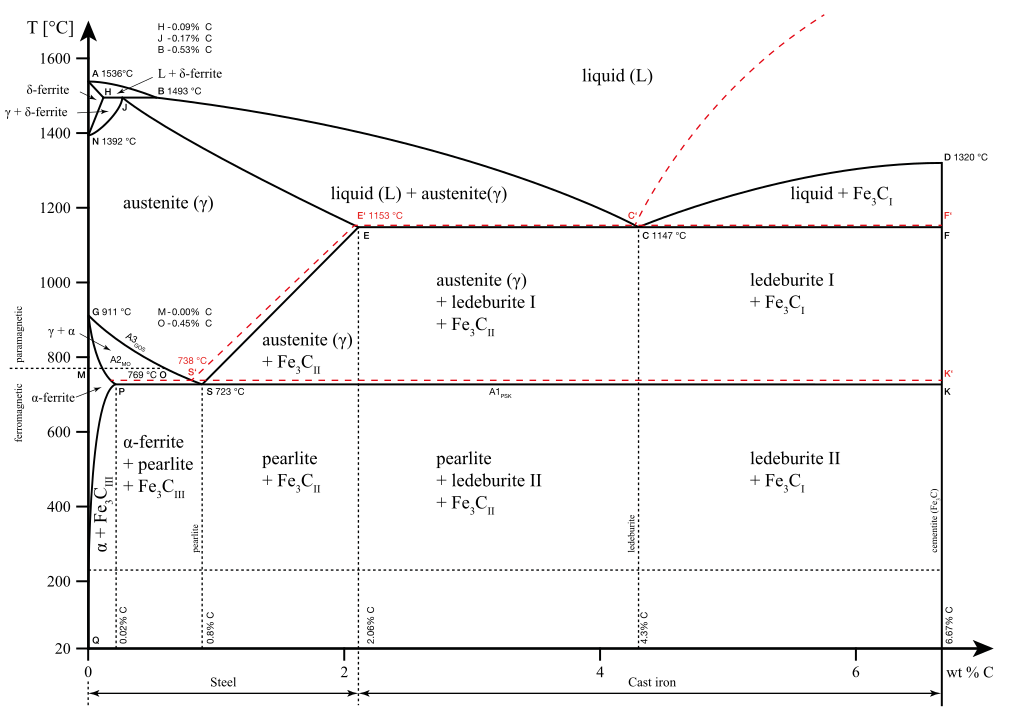 There are two iron-carbon equilibrium diagrams:

The stable condition usually takes a very long time to develop. The metastable diagram is of more interest. Fe\(_3\)C iron carbide called cementite because it is hard. Following phases exist on Fe-Fe\(_3\)C diagram: - Liquid solution of iron and carbon (L) - Ferrite (\(\alpha\)) – an interstitial solid solution of carbon in Fe \(\alpha\) (BCC). At room temperature ferrite is ductile but not very strong. - Austenite - an interstitial solid solution of carbon in Fe \(\gamma\) (FCC). - Cementite (Fe\(_3\)C) hard and brittle compound with chemical formula Fe\(_3\)C. It has metallic properties. On a base of Fe-Fe\(_3\)C diagram we can divide iron-carbon alloys into:

There are three allotropic forms of iron:

The Lever Rule is a way in which to calculate the proportions of each phase present on a phase diagram in a two phase field at a given temperature and composition.
The lever rule is a mechanical analogy to the mass balance calculation. The tie line in the two-phase region is analogous to a lever balanced on a fulcrum. Finding the amounts of phases in a two phase region:

Solidification of Pure Metal: Solidification is a phase transition in which a liquid turns into a solid when its temperature is lowered below its freezing point. This process is a first order transformation which involves nucleation and growth. Nucleation is the process whereby nuclei (seeds) act as templates for crystal growth. Solid phase will nucleate till liquid phase is exhausted.

Precipitation Hardening: The strength and hardness of some metal alloys may be improved by the formation of extremely small, uniformly dispersed particles (precipitates) of a second phase within the original phase matrix.

The annealing process is intended to optimize the steel’s machinability and formability. In manufacturing steel products, machining and forming are often employed. Quenched and tempered steel may not machine or bend very easily and annealing is often necessary to manufacture steel components economically. Annealing is used after cold forming operations, since during forming, the deformed areas of the steel may become work-hardened and susceptible to fracture.

Steel is heated 50 to 100\(^\circ\)F (10 to 38\(^\circ\)C) above the A3 for hypoeutectoid steels, and above the Acm for hypereutectoid steels, with slow controlled cooling, resulting in soft andductile microstructures that have commercially maximized machinability and formability. In full annealing, cooling must take place very slowly so that a coarse pearlite is formed. When the term annealing is applied to steels it is assumed that full annealing was performed.

The process of normalizing consists of heating to a temperature 50 to 100\(^\circ\)F (10 to 38\(^\circ\)C) above the A3 and allowing the part to cool in still room temperature air. Normalizing can be described as a homogenizing or grain-refining treatment. Within any piece of steel, the composition is usually not uniform throughout. That is, one area may have more carbon than the area adjacent to it. These compositional differences affect the way in which the steel will respond to heat treatment. If the steel is austenitized, the carbon can readily diffuse throughout, and the result is a reasonably uniform composition from one area to the next. The steel is then more homogeneous and will respond to the heat treatment is a more uniform way.

Tempering is generally applied to hardened or quenched steel to improve mechanical properties, for the most part, tensile strength, ductility and toughness. Tempering, formerly called drawing, is performed by heating a quenched part to some point below the lower critical transformation temperature for sufficient time depending on its size, commonly 2 hours or more. Most steels are tempered between 400 to 1100\(^\circ\)F (205 to 595\(^\circ\)C). As higher temperatures or longer periods of time are employed, toughness and ductility are increased, but at the expense of reduced hardness and tensile strength. The microstructure of quenched and tempered steel is referred to as tempered martensite.

When a metal is heated, expansion occurs which is proportional to the temperature rise. Similarly, upon cooling a metal, contraction occurs. When a steel component is heated at one point more than at another, as in welding or during forging, internal stresses are set up. During heating, expansion of the heated area do not occur uniformly, and the component tends to distort. On cooling, contraction is restricted from occurring by the unyielding cold metal surrounding the heated area, as in a weldment. The forces attempting to contract the metal are not relieved, and when the metal is cold again, the forces remain as internal stresses, also called residual stresses. Stresses also result from volume changes which accompany phase transformations, such as the transformation of austenite to martensite.
Residual stresses are harmful because they may cause distortion of steel parts and/or may render the part susceptible to brittle fracture and stress corrosion cracking mechanisms. To relieve these stresses, plain carbon steel is typically heated to between 940 to 1100\(^\circ\)F (482 to 595\(^\circ\)C), assuring that the entire part is heated uniformly, then slowly cooled back to room temperature. This procedure is called relief annealing or, more commonly, stress relieving.

The process of heat treatment consists of the following or steps: